In chemistry, bis(oxazoline) ligands (often abbreviated BOX ligands) are a class of privileged chiral ligands containing two oxazoline rings. They are typically C2‑symmetric and exist in a wide variety of forms; with structures based around CH2 or pyridine linkers being particularly common (often generalised BOX and PyBOX respectively). The coordination complexes of bis(oxazoline) ligands are used extensively in asymmetric catalysis.

The synthesis of oxazoline rings is well established and in general proceeded via the cyclisation of a 2‑amino alcohol with any of a number of suitable functional groups. In the case of bis(oxazoline)s, synthesis is most conveniently achieved by using bi-functional starting materials; as this allows both rings to be produced at once. Of the materials suitable, dicarboxylic or dinitrile compounds are the most commonly available and hence the majority bis(oxazoline) ligands are produced from these materials.

Part of the success of the BOX and PyBOX motifs lies in their convenient one step synthesis from malononitrile and dipicolinic acid, which are commercially available at low expense. Chirality is introduced with the amino alcohols, as these are prepared from amino acids and hence are chiral (e.g. valinol).

The left hand structure has a C2‑rotational axis whereas the right hand structure is asymmetric. Arrows indicate the theoretical attack trajectories of reagents, identical colours lead to identical transition states (and hence products) with red arrows being disfavoured due to steric repulsion.

In bis(oxazoline) complexes the metal is held close to the stereogenic centres, which will strongly influence the enantioselectivity of any process taking place there. However the C2‑symmetry of the ligand is also important in controlling this enantioselectivity.

While the presence of any symmetry element within a ligand intended for asymmetric induction might appear counterintuitive, asymmetric induction only requires that the ligand be chiral (i.e. have no improper rotation axis); it does not have to be asymmetric (i.e. devoid of any symmetry element). C2‑symmetry actually improves the enantioselectivity of the complex by reducing the number of transition states with a unique geometry. Steric/kinetic factors then usually favour the formation of a single product.[1] The benefits of C2‑symmetry in bis(oxazoline) ligands have been reviewed in depth[2]

In general, for methylene bridged BOX ligands the stereochemical outcome is consistent with a twisted square planar intermediate that was proposed based on related crystal structures.[3][4] The substituent at the oxazoline’s 4-position blocks one enantiotopic face of the substrate, leading to enantioselectivity. This is demonstrated in the following aldol-type reaction,[5] but is applicable to a wide variety of reactions such as Mannich-type reactions,[6] ene reaction,[7] Michael addition,[8] Nazarov cyclization,[9] and hetero-Diels-Alder reaction.[10]

On the other hand, two-point binding on a Lewis acid bearing the meridially tridentate PyBOX ligand would result in a square pyramidal complex. A study using (benzyloxy)acetaldehyde as the electrophile showed that the stereochemical outcome is consistent with the carbonyl oxygen binding equatorially and the ether oxygen binding axially.[11]

Metal complexes incorporating bis(oxazoline) ligands are effective for an wide range of asymmetric catalytic transformations and have been the subject of numerous literature reviews.[12][13][14] The neutral character of bis(oxazoline)s makes them well suited to use with noble metals, with copper complexes being particularly common.[13] Their most important and commonly used applications are in carbon–carbon bond forming reactions.

bis(oxazoline) ligands have been found to be effective for a range of asymmetric cycloaddition reactions, this began with the very first application of BOX ligands in carbenoid cyclopropanations[15] and has been expanded to include 1,3-Dipolar cycloaddition and Diels-Alder reactions. Bisoxazoline ligands have also been found to be effective for Aldol, Michael and Ene reactions, amongst many others

The success of bis(oxazoline) ligands for carbenoid cyclopropanations led to their application for aziridination. Another common reaction is hydrosilylation, which dates back to the first use of PyBOX ligands.[18] Other niche applications include as fluorination catalysts[19] and for Wacker-type cyclisations.[20]

The development of bis(oxazoline) ligands

Oxazoline ligands were first used for asymmetric catalysis in 1984 when Brunner et al. showed a single example, along with a number of Schiff bases, as being effective for enantioselective carbenoid cyclopropanation.[21] Schiff bases were prominent ligands at the time, having been used by Ryōji Noyori during the discovery of asymmetric catalysis in 1968[22] (for which he and William S. Knowles would later be awarded the Nobel Prize in Chemistry). Brunner’s work was influenced by that of Tadatoshi Aratani, who had worked with Noyori,[23] before publishing a number of papers on enantioselective cyclopropanation using Schiff bases.[24][25][26]

In this first usage the oxazoline ligand performed poorly, giving an ee of 4.9% compared to 65.6% from one of the Schiff base ligands. However Brunner reinvestigated oxazoline ligands during research into the monophenylation of diols, leading to the development of chiral pyridine oxazoline ligands, which achieved ee’s of 30.2% in 1986[27] and 45% in 1989.[28] In the same year Pfaltz et al. reported the use of C2‑symmetric semicorrin ligands for enantioselective carbenoid cyclopropanations, achieving impressive results with ee’s of between 92-97%.[29] Reference was made to both Brunner’s and Aratani’s work, however the design of the ligands was also largely based on his earlier work with various macrocycles.[30] A disadvantage of these ligands however, was that they required a multi-step synthesis with a low overall yield of approximately 30%. 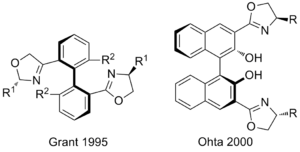 Brunner’s work led to the development of very first bisoxazolines by Nishiyama et al., who synthesised the first PyBox ligands in 1989. These ligands were used in the hydrosilylation of ketones; achieving ee’s of up to 93%[18] The first BOX ligands where reported a year later by Masamune et al.[15] and were first used in copper catalysed carbenoid cyclopropanation reactions; achieving ee’s of up to 99% with 1% molar loadings. This was a remarkable result for the time and generated significant interest in the BOX motif. As the synthesis of 2-oxazoline rings was already well established at this time (literature reviews in 1949[31] and 1971[32]), research proceeded quickly, with papers from new groups being published within a year.[33][34] and review articles being published by 1996.[35] Today a considerable number of bis(oxazoline) ligands exist; structurally these are still largely based around the classic BOX and PyBOX motifs, however they also include a number of alternative structures, such as axially chiral compounds.[36][37]

Aza-bis(oxazolines) are introduced as chiral ligands for asymmetric catalysis combining the advantages of easy availability of bis(oxazolines) and backbone variability of aza-semicorrins. Especially, the title ligands could be attached to a polymeric support, which allowed the development of easily recoverable copper(I)-catalysts for asymmetric cyclopropanation reactions.

Racemic 1,2-diols and a-hydroxy carbonyl compounds can be asymmetrically benzoylated in a kinetic resolution in the presence of various Cu(II)-azabis(oxazoline) catalysts. A novel bisbenzyl substituted aza(bisoxazoline) ligand proved to be especially effective when immobilized on MeOPEG5000, giving 91 – ≥99% ee in 37 – 49% yield for each of five sequential reactions.

The role of binding constant in the efficiency of chiral catalysts immobilized by electrostatic interactions. The case of azabis(oxazoline)-copper complexes

Azabis(oxazoline)-copper complexes are considerably more stable than the analogous bis(oxazoline)-copper complexes, as shown by theoretical calculations. The enhanced stability allows the efficient immobilization by means of electrostatic interactions with different anionic supports, such as clays and nafion-silica nanocomposites, without the loss of ligand observed with bis(oxazolines). In this way, enantioselectivities around 90% ee are obtained in the cyclopropanation reaction