Fluoxetine (also known by the tradenames Prozac, Sarafem, Ladose and Fontex, among others) is an antidepressant of the selective serotonin reuptake inhibitor (SSRI) class. Fluoxetine was first documented in 1974 by scientists from Eli Lilly and Company.[6] It was presented to the U.S. Food and Drug Administration in February 1977, with Eli Lilly receiving final approval to market the drug in December 1987. Fluoxetine went off-patent in August 2001.[7] 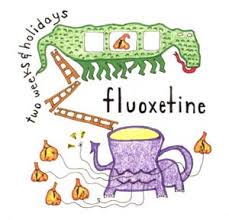 Fluoxetine is approved in the US for the treatment of major depression (including pediatric depression), obsessive-compulsive disorder (in both adult and paediatric populations), bulimia nervosa, panic disorder and premenstrual dysphoric disorder.[8] In addition, fluoxetine is used to treat trichotillomania if cognitive behaviour therapy is unsuccessful.[9] In combination with the atypical antipsychotic olanzapine it is known by a few brand names,[note 1] including its US brand name Symbyax, which is approved for the treatment of depressive episodes as part of bipolar I disorder and in the treatment of treatment-resistant depression.

Despite the availability of newer agents, fluoxetine remains extremely popular. In 2010, over 24.4 million prescriptions for generic formulations of fluoxetine were filled in the United States alone,[10] making it the third most prescribed antidepressant after sertraline(SSRI; became generic in 2006) and citalopram (SSRI; became generic in 2003).[10] In 2011, 6 million prescriptions for fluoxetine were handed out in the UK.[11]

Uses of the pharmaceuticalProzac is an antidepressant and is used in the treatment of depression, panic attacks, and obsessive compulsive disorder. It was first released in 1988 and has been used since by upwards of 40 million people worldwide, according to a study done in 2008. A study released in the journal Public Library of Science Medicine journal in 2008 claimed that Prozac was ineffective as an antidepressant after a study done in which both patients who took the drug and patients who were given a placebo drug showed the same improvement as those who were given the real treatment.While its main usage has been to treat depression, Fluoxetine has also been used for research in the discovery the role of 5-HT in CNS physiology and pathophysiology. It has alos been used in the treatment of anorexia nervosa, bulimia nervosa, obsessive–compulsive disorder, panic disorder, premenstrual dysphoria and generalized anxiety disorder (Wong 772).
Prozac was manufactured by Eli Lilly and Company until its patent lapsed in 2001. Fluoxetine, however, is now the active ingredient in another Lilly product – Sarafem, a pill for premenstrual syndrome.

Synthesis:While several viable syntheses exist for fluoxetine, one particular synthesis is especially practical for undergraduate laboratories. While some syntheses use toxic compounds such as the reducing agent B2H6 and the chlorinating agent SOCl2 to yield fluoxetine, there is at least one synthesis that circumvents these hazardous reagents. The synthesis given by Perrine, Sabanayagam, and Reynolds instead uses the less hazardous reagents NaBH4 and KOCMe3. Furthermore, while other syntheses require use of the costly compound 4-(trifluoromethyl)phenol, the synthesis avoids this compound and instead requires the inexpensive 1-chloro-4-(trifluoromethyl)benzene. For these reasons, the synthesis given below is best suited for introductory laboratories.

The commercially available compound 3-(dimethylamino)-1-phenylpropan-1-one is reduced with sodium borohydride (NaBH4) to form 3-(dimethylamino)-1-phenylpropan-1-ol. This alcohol is deprotonated with potassium t-butoxide (KOCMe3), and the resulting alkoxide undergoes aromatic substitution onto 1-chloro-4-(trifluoromethyl)benzene. Aromatic substitution within the polar aprotic solvent DMAA yields the drug precursor “N-methyl-Prozac.” NMP is converted to Prozac (fluoxetine) via N-demethylation with cyanogen bromide (CNBr).

Fluoxetine hydrochloride is a white to off white crystalline solid which has a melting point of 158.4-158.9oC. It has a maximum solubility in water of 14mg/ml.

Freely soluble in methanol and ethanol
Soluble in acetonitrile, chloroform and acetone
Practically insoluble in toluene, cyclohexane and hexane

The high resolution NMR spectrum can be readily interpreted.

The main source of information that the mass spectrum provides is the molecular weight of the compound which in this case can be seen to be approximately 346u.

The A protons are chemically equivalent due to the symmetry of the system and hence appear at the same ppm value. Each A hydrogen will couple to its neighbouring B proton and the splitting pattern will be a doublet. The electron withdrawing effect of the fluorine atoms combined with the aromatic ring current is responsible for the high chemical shift of these protons.

The B protons are again in identical chemical environments and they each couple to the neighboring A proton. A doublet is therefore observed in the spectrum.

The C is close to an electronegative oxygen atom and an aromatic ring. These withdraw electron density both inductively and mesomerically. The C sisgnal is split into a triplet by 3J coupling to the adjacent F protons.

The D proons couple to the F protons but not to the adjacent NH proton resulting in a triplet.

The E signal corresponding to the methyl group is obviously a singlet as there are no adjacent hydrogens to which the E protons can couple.The NH proton is again discounted due to its transient nature.

The F protons show a multiplet. These protons are not chemically equivalent although they have been grouped together. These hydrogens are adjacent to an asymmetric centre and are thus diastereotopic. Replacement of each hydrogen by a different group would result in opposite diastereomers. As the F protons are not equivalent they couple to each other as well as to the D and C protons which are adjacent.A compliclated multiplet therefore results.

The hydrogen shown attached to the nitrogen atom does not appear in the spectrum as such protons readily interchange in solution.

The five aromatic protons appear as amultiplet between the shifts of the A and B protons.

The three dimensional structure of fluoxetine has been determined by X-ray crystallography. In the solid state the planes defined by the two aromatic rings are skewed preventing the possibility of intramolecular interactions between the rings.The methylene units of the methylpropanamine part adopt the expected conformational relationships thus minimising torsional strain.The C1-C2-C3-O4 dihedral angle is 60.6. From this it can be concluded that the propanamine side chain folds towards the phenoxy part as opposed to adopting a fully extended configuration. This folded three dimensional relationship is thought to be essential for a high affinity interaction with the serotonin uptake carrier to take place. The various substituents on the phenoxy part of fluoxetione are also very important in determining its potency and selectivity.

Although th folded propylamine part of fluoxetine plays in acrucial role in its pharmacological properties, the 3-phenyl group is also a critical aspect of its structure. It is thought that the enhancement of potency attributed to this group can be explained in terms of its interaction with a hydrophobic pocket on the serotonin uptake carrier. Evidence in support of this hypothesis is the similar potency of both enantiomers of fluoxetine. This would be expected if the afore-mentioned hydrophobic interaction is important.

Fluoxetine hydrochloride crystallised from water as colourless needles in the orthorhombic space group known as Pcab. Each unit cell contains eight molecules and the molecules are arranged in bilayers with the hydrophobic(trifluoromethyl) phenoxy and hydrophilic amine hydrochloride parts juxtaposed to the corresponding regions of a second fluoxetine molecule.

Structure of the compound

Identification of bond types found in the molecule

Identification of all chirality centers in the molecule: